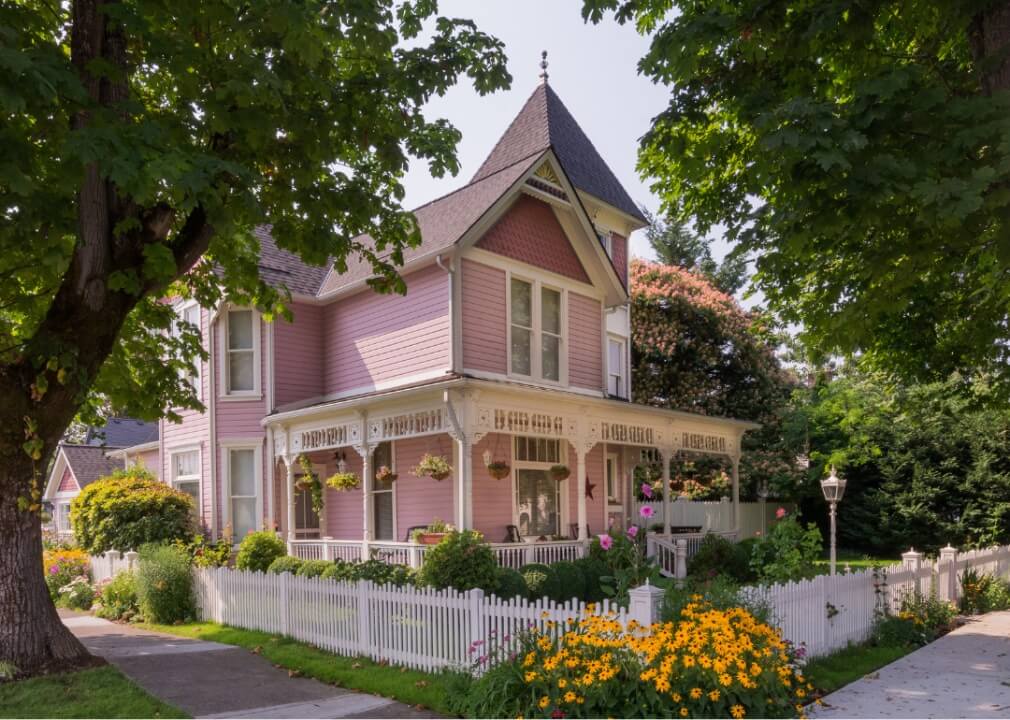 When it comes to home ownership, some buyers prefer towns steeped in history, and given the opportunity, they'd choose to restore a historic home back to its former glory.

Historic preservation is a way to maintain a city's uniqueness and show its story. While it's a popular concept for many cities, there are many places where some may feel differently. For instance, in Japan, homes are often demolished every 30 years. In America, residents in Austin, Texas are also less likely to find historic homes: The city had the highest percentage of new houses—those built after 2014—in this data set.

For those looking for the charm of historic residences, New Jersey Real Estate Network collected Census Bureau data to find which metro regions have the most number of old homes. There are 23,842,900 houses built before 1949 in the U.S., which make up about 17% of all housing units.

Some cities on this list date back to colonial times. Other locales boomed as industry and railway transportation expanded. But in many smaller towns, people relocated after the steel, mining, textile, and railroad industries collapsed, greatly reducing demand for new construction.

The data in this ranking is from the Census Bureau's 2020 5-year American Community Survey. Metros are ranked based on the percentage of total housing units in the region that were built in 1949 or earlier. The percentages displayed are rounded. 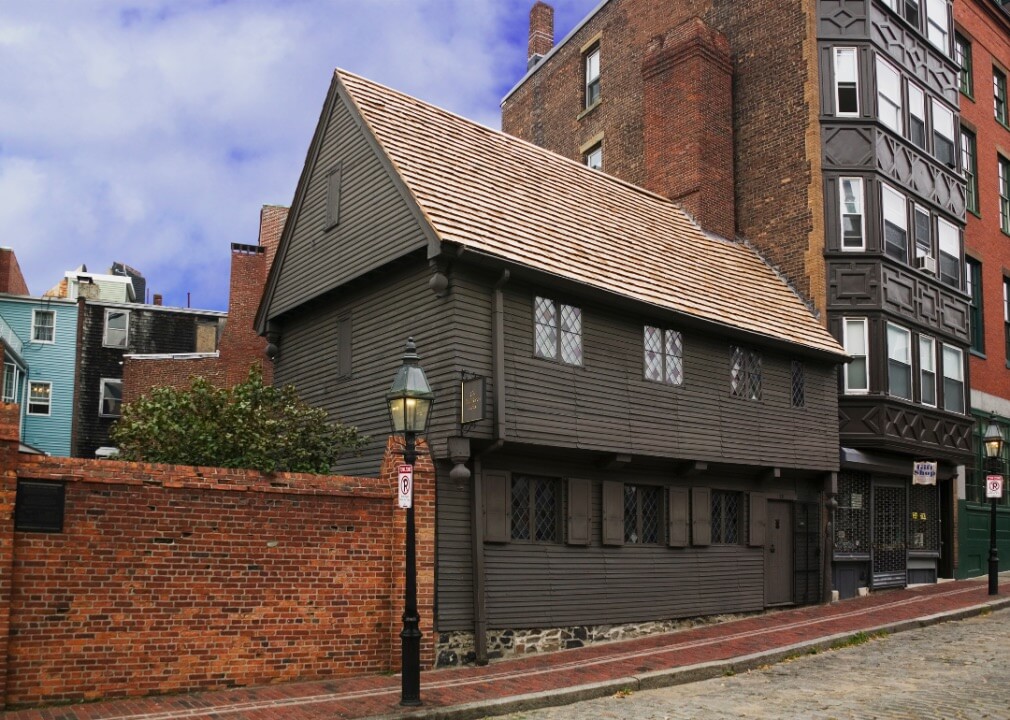 When you drive around Greater Boston, you know you're driving through early American history, as all of the towns and cities in this area were settled well before the Revolutionary War. Preserving history is important in this area. Many historic homes still survive and are listed on the National Register of Historic Places or State Register of Historic Places or are in historic districts within a town or city. 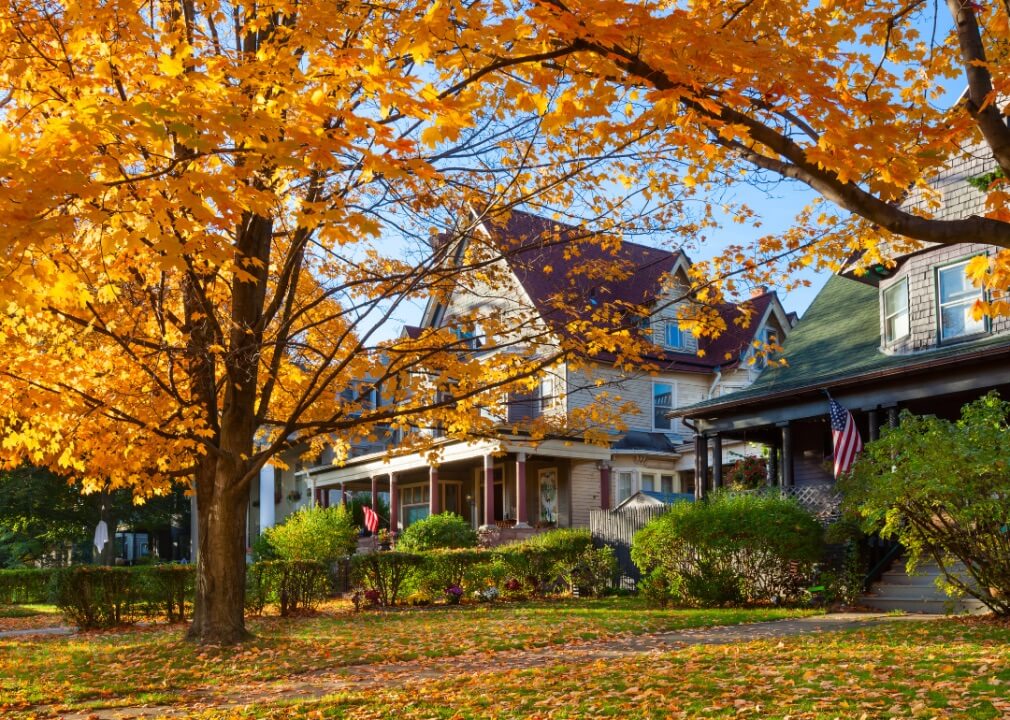 At the turn of the 20th century, Buffalo had more millionaires per capita than any other U.S. city due to its status as the country's largest grain port and second largest railroad hub. The Buffalo gentry's homes along Delaware Avenue matched their wealth, but today only a two-block section of Millionaire's Row survives.

As Buffalo's millionaire class developed, many residential streets throughout the city converted to mixed-use properties, with commercial real estate on the ground level and residences on the upper floors. This building strategy helped create commercial districts within neighborhoods. 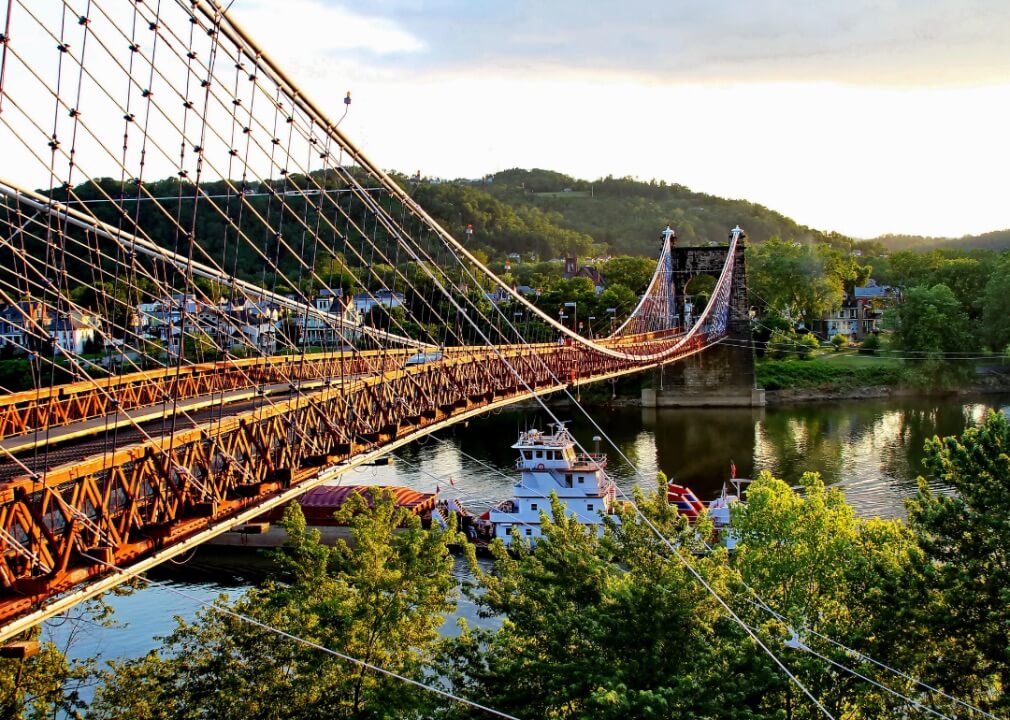 Located on the banks of the Ohio River, Wheeling was the original capital of West Virginia. Industry thrived there—iron, steel, glassworks, tobacco, and cut nail manufacturing all had a significant influence on the economy during the late 1800s.

The city's boom times are reflected in its housing stock, which features a high concentration of Victorian-era architecture, including Queen Anne, Romanesque, Greek Revival, and Italianate styles. The Chapline Street Row Historic District showcases the higher-end example of this architecture. North Wheeling features more modest homes from this period, but many of South Wheeling's gritty row houses have been demolished. 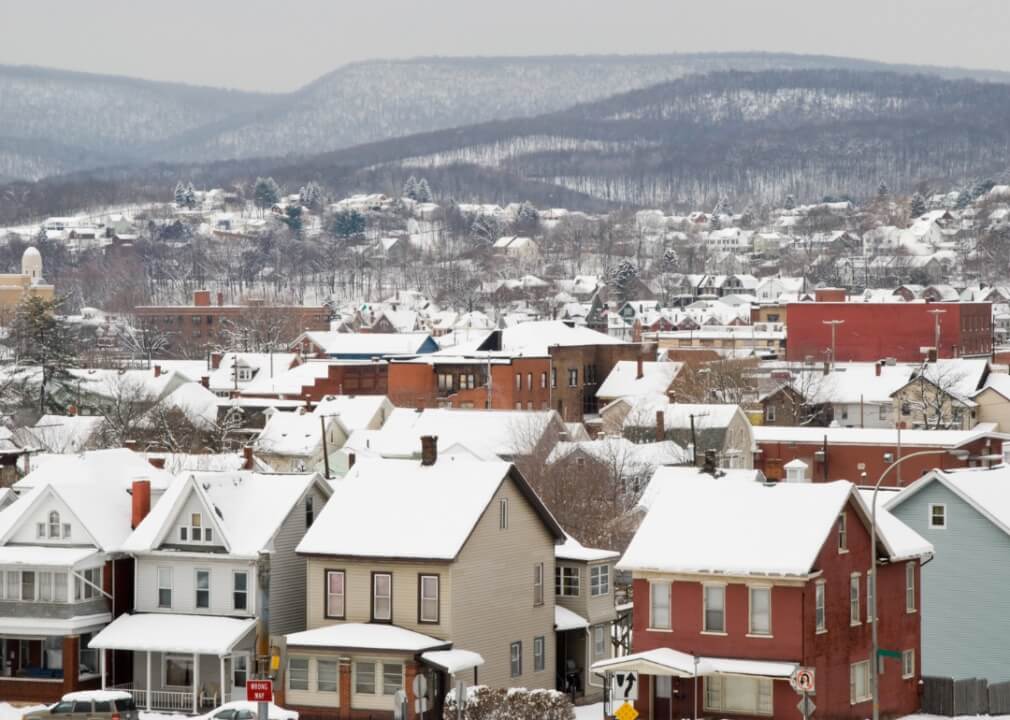 Altoona's early industrial leanings were in iron making, but the city gained prominence in the railroad industry. In the mid-1800s, Pennsylvania Railroad built up the city as a terminal; Altoona also became a renowned center for building and repairing steam locomotives and railcars.

Its heyday was in the early 1900s, and the city's housing stock reflects that era, consisting of many single-family and row houses. Styles found in the city's various historic districts include Queen Anne and Colonial Revival.

The proportion of old to new houses may be shifting though—the city set records in 2020 and 2021 in the number of construction permits issued for all types of residential housing. 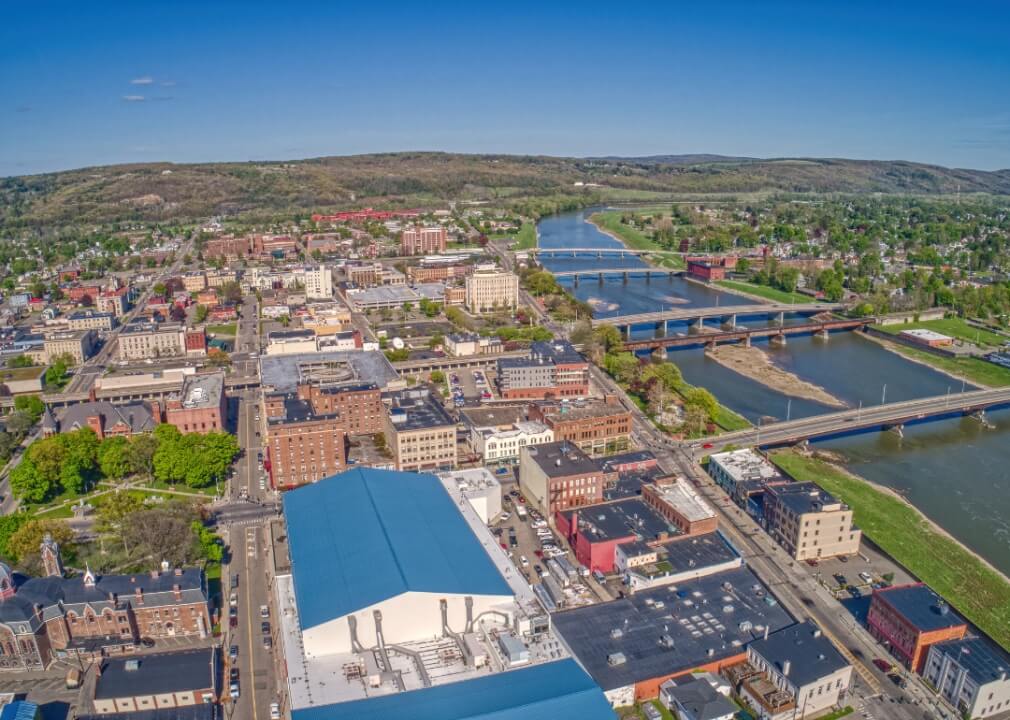 Elmira was a thriving transportation hub due to its location on the canals and railways of New York state in the 1800s and early 1900s. When Hurricane Agnes devastated Elmira's downtown in 1972, the decision not to rebuild crippled the city's comeback.

That's left an aging housing stock that reflects the city's glory days. This includes homes built in the Federal, Italianate, Greek Revival, Queen Anne, Tudor Revival, and Colonial Revival styles. In the Southside neighborhood, some Craftsman and Prairie-style homes exist. The Elmira area also has some Octagon homes, most notably a small structure owned by Mark Twain, which he used as a study. 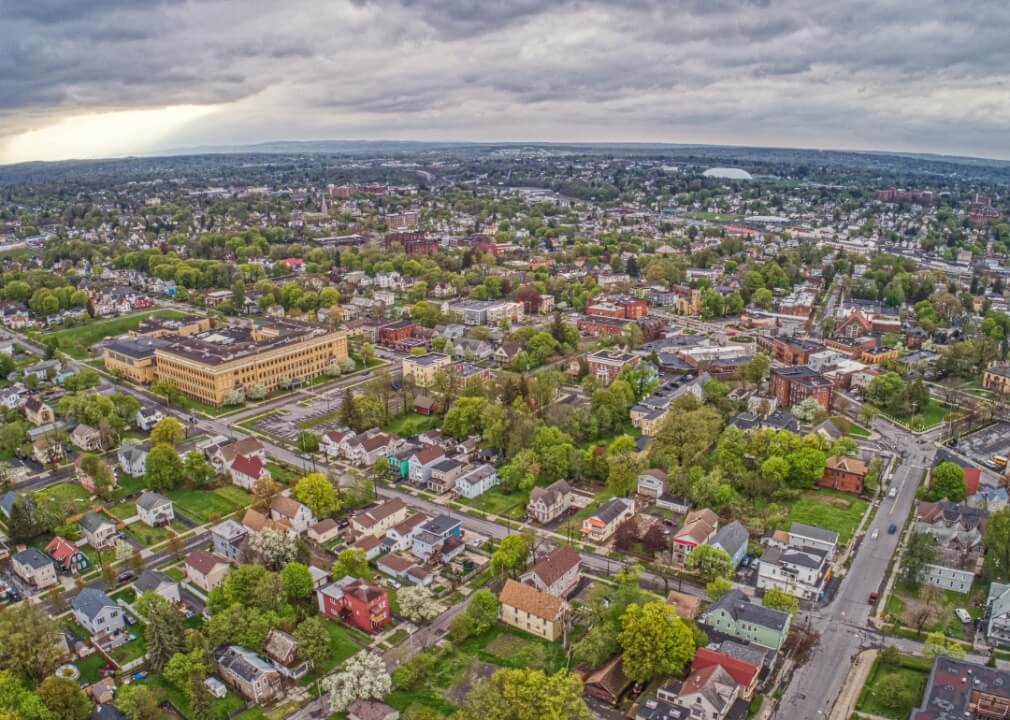 These cities, which lie in the center of New York state along the Mohawk River, played a part in the Revolutionary War. When the Erie Canal between Rome and Utica was completed in 1819, these cities became instrumental in the transportation of goods through the 1800s. Rome produced about 10% of the country's copper, and Utica was a major center for textile manufacturing.

Along with the typical architectural styles of the time, such as Federal, Queen Anne, Romanesque, and Greek Revival, the country's centennial renewed interest in Colonial-style homes in this area. Stick Style homes, which feature horizontal siding and wood ornamentation around porches, and Shingle Style homes, which were covered in wood shingles, became popular in the 1870s and 1880s. Bungalows were introduced in the early 20th century and became very popular.

If you're looking for a piece of historic New Jersey, a Colonial-style home might be perfect for you. Discover beautiful New Jersey colonial homes for sale to discover a piece of US history you can make your own. 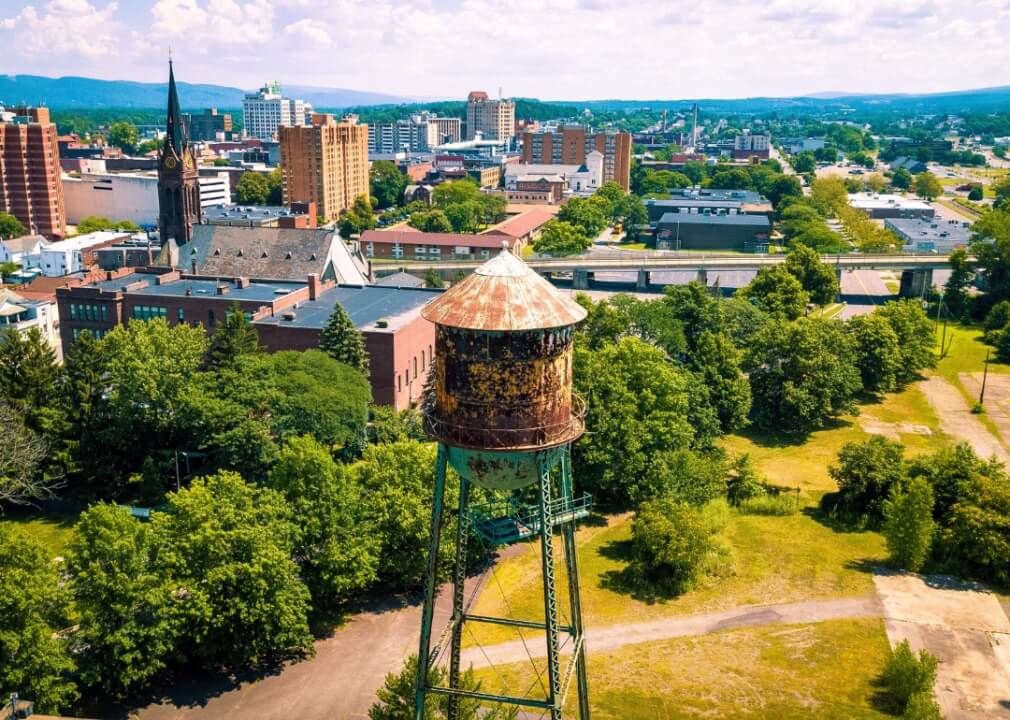 Many people think of Scranton as the home of Dunder Mifflin from NBC's workplace comedy series "The Office". But the discovery of coal and the development of the railroad helped Scranton and Wilkes-Barre become major centers of industry in northeastern Pennsylvania. The area has seen its share of disasters: In 1959, miners broke through the bed of the Susquehanna River, which flooded the mine and brought the region's mining industry to a screeching halt. In 1972, Hurricane Agnes unleashed a fury of water on the area and destroyed many homes and businesses, including many historic Victorian buildings.

Elegant homes of the day ran the gamut of styles, from Colonial Revival to Beaux-Arts. Even students at Wilkes University have the option to relive the glory days in mansion-style housing. 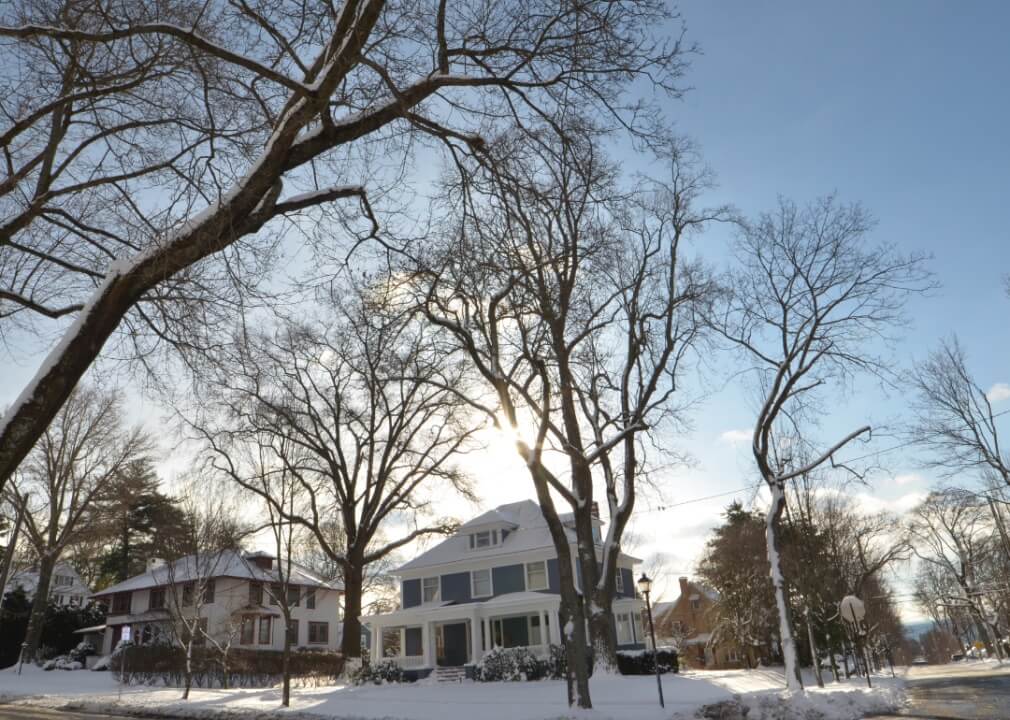 Even though Johnstown has had to rebuild three times due to catastrophic floods in 1889, 1936, and 1977, it still has a lot of older homes. Johnstown's industrial ties to coal and steel made it a popular destination with 19th and early 20th century immigrants from all over Europe.

Much of the city's older housing stock was designed for the working class and is vernacular in style—think nondescript balloon frame or plank houses. Multifamily housing styles include side-by-side doubles, flats, row houses, and brick apartment buildings.

More distinguished homes in the city represent a number of architectural styles, from Queen Anne and Romanesque to Prairie and Bungalow. 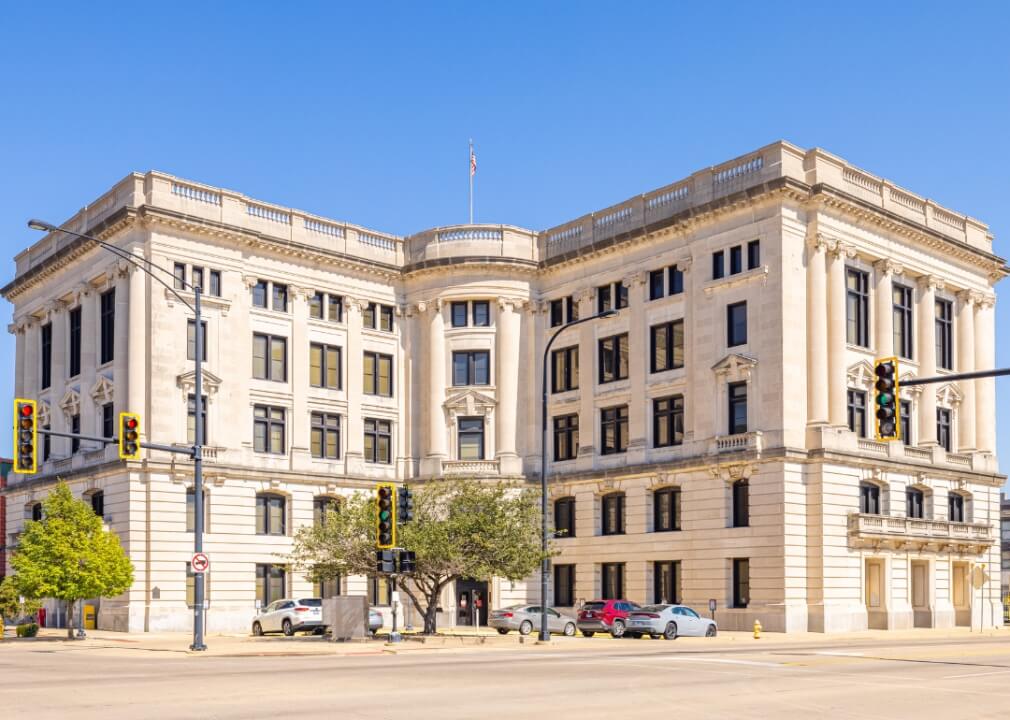 Located 2.5 hours south of Chicago, Danville is a city on a roller coaster of ups and downs.

The coal, railroad, and manufacturing industries helped it thrive in the early 1900s, but the Great Depression and slowdown of the railroad industry caused it to falter. In the 1950s, more industries moved in, creating expansion. In recent years, globalized outsourcing and high state taxes have led to a decline in population and continual struggles with recessions.

The city's oldest residential neighborhoods are next to the downtown area. The city's zoning laws aim to maintain the unique character of this area by stipulating the architectural styles. These styles include Italianate, Queen Anne, Craftsman, Prairie, Greek Revival, Tudor, and American Foursquare. 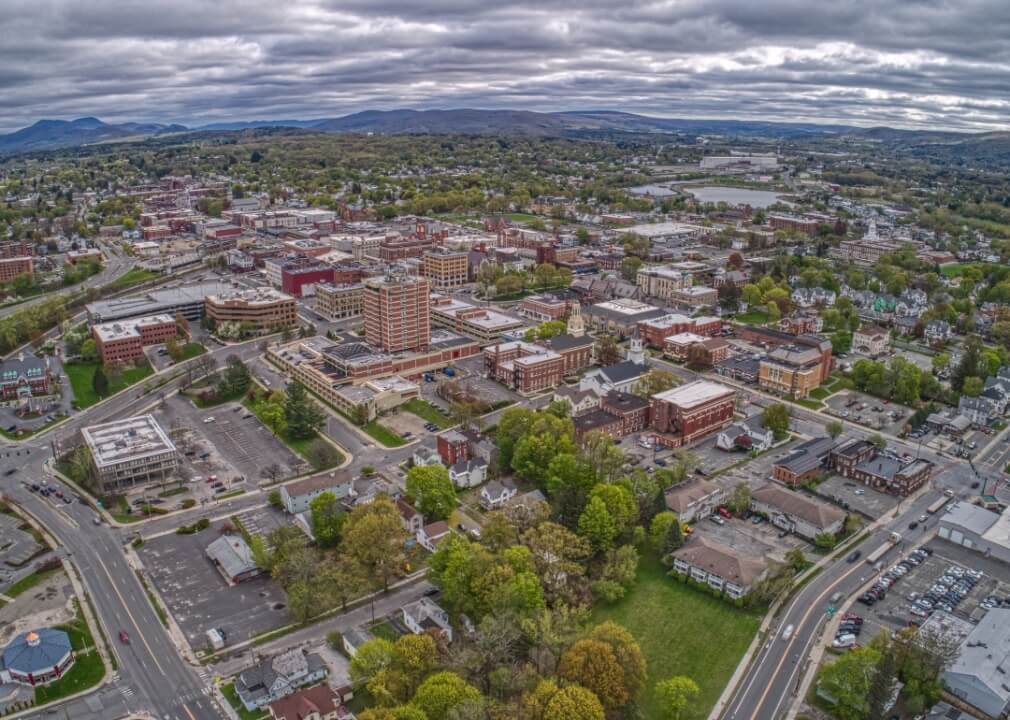 Settled in 1752, Pittsfield originally had an agricultural economy, but saw, grist, and textile mills popped up on its landscape. In 1891, the Electric Manufacturing Company, which would eventually become General Electric, relocated there and helped the city thrive.

GE was also largely responsible for the city's decline, as the company closed or relocated major business lines, including its transformer and aerospace divisions.

Today, the city is reinventing itself as a cultural center nestled in the beauty of the Berkshire Mountains. In 2021, the city rezoned its downtown to create a Downtown Creative District, which includes mixed-use development. One example of this is the redevelopment of The Howard Building, a 1916 Classical Revival-style commercial building that now has retail on the ground floor and loft apartments on the upper floors.